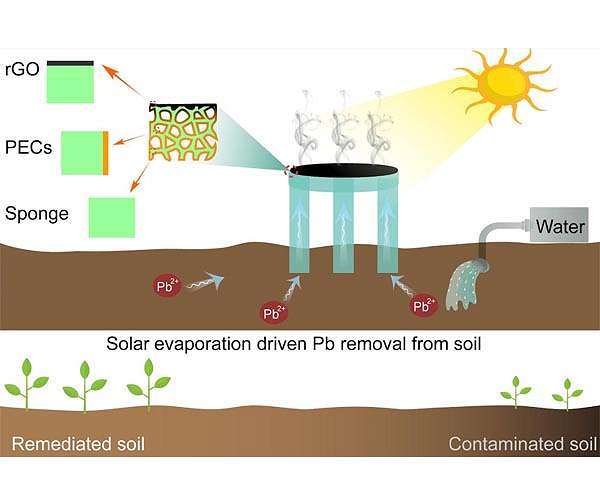 A team led by University of South Australia researchers has pioneered a new soil remediation technique that is significantly faster, simpler, safer, and more cost-effective than currently available methods.

A recent report by the UN’s Food and Agriculture Organization identifies soil pollution as a major threat to the global production of safe and sufficient food, and notes that removing pollutants from soil is currently “a technically complex and costly undertaking, [with costs] ranging from tens of thousands to hundreds of millions of USD per year”.

A UniSA-led team including Associate Professor Haolan Xu and Dr Gary Owens has developed a new remediation technique that uses a super-efficient solar evaporation surface to draw water from the soil through a sponge-like filter that traps contaminants, mimicking the process of transpiration that occurs in natural plants, but at a greatly accelerated rate.

“This means plants can be used to extract contaminants from soil, but the process is very, very slow, often taking multiple growing seasons, particularly in heavily contaminated situations, where the soil toxicity means the plants struggle to grow and often die.

“We have created a system that mimics this process – a form of biomimetic plant – but one that does so at a much faster rate and without any of the problems caused by toxicity.”

Worldwide, more than 10 million sites are considered soil polluted, with more than half contaminated by heavy metals such as cadmium and lead, or metalloids such as arsenic.

The new system can remove such contaminants in as little as two weeks by using a super-efficient solar evaporation surface to rapidly draw water and contaminants from the soil into the biomimetic plant body.

“The solar evaporator used in this system is a variation of technology we are developing for many purposes, including desalination and wastewater purification,” Assoc Prof Xu says.

“We are achieving world-leading evaporation rates with this technology in many other areas, and as far as we know, this is the first time this approach has been applied to soil remediation.

“It is a very exciting adaptation of solar evaporation techniques, with huge potential for addressing a growing global problem.”

Both the evaporator and the contaminant-capture component are made from cheap, abundantly available materials with extremely long operational lives, and the system requires very little maintenance, with minimal setup and running costs.

“Installing this system is about as easy as driving some stakes into the ground,” Assoc Prof Xu says, “and unlike some existing soil washing techniques, it doesn’t disturb or destroy the soil composition.

“Also, the water that is added to the soil could be captured from the evaporator and recycled, meaning this could operate as a closed system, with almost no running costs.”

Further adding value to the technique, Dr Owens says it is a relatively simple process to remove the captured contaminants from the biomimetic plant body.

“This means those materials can be harvested for reuse, and the adsorption material, which has a very high saturation point, can be reused over and over again,” he says.

The remediation technique has currently been successfully tested on a range of heavy metals including lead, chromium, cadmium and zinc, and the research team believes it will also prove a viable approach to removing other major soil contaminants.

“By adjusting the properties of the adsorption material, we could use this to remove antibiotics or PFAS from soil, and to reduce soil salinity,” Assoc Prof Xu says.

“As it is so simple and adaptable, this really could be a complete game changer – a paradigm shift – for soil remediation,” Dr Owens says.

“And that could have a massive impact on millions of people around the world.” 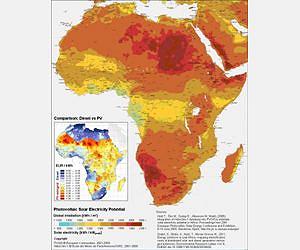 
Solar panels glint in the sun on a Tunisian lagoon, part of a long-delayed drive to harness the North African country’s vast renewable energy potential.

While industry insiders complain of red tape, fossil fuel prices that soared after Russia’s February invasion of Ukraine created a powerful incentive for such investments across the Maghreb region.

Every Aspect of Construction Needs to Focus on Sustainability...Especially Project Managers

How Can You Protect Your Small Green Business?